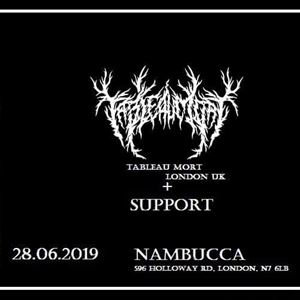 After their sold out show in October 2020, the New Cross Inn are proud to welcome back:

Tableau Mort
Founded in November 2017 in London, United Kingdom by musicians of Romanian origin, the black metal outfit TABLEAU MORT has in its current incarnation former members of bands such as Sin, Indian Fall or Justonefix, Havok (IT) all with a solid reputation within the metal underground community.

Whilst Tableau Mort describe themselves as a Black Metal band, there are many aspects and layers to their sound, delivering modern and powerful music. Drawing inspiration from across the many sub-genres of metal, the band values the creation of an atmospheric and emotional sound that is both melodic and melancholic. Vocally, Tableau Mort mix Orthodox chanting with frenzied screams to expand on their macabre foundations.
https://www.tableaumort.com/

Ninkharsag
Ninkharsag was formed in 2009 to create uncompromising Black Metal in the traditional style. Their first album, 'The Blood of Celestial Kings' was released on Candlelight Records in 2015. In 2021 the band plan to release their second album, 'The Dread March of Solemn Gods' on Vendetta Records.
https://ninkharsag.bandcamp.com/

Slave Steel
Hot off the heels of their recent performance at Bloodstock 2021, Slave Steel is a metal band based in London, a project that started in Rome in 2008. Rooted in thrash, death and heavy metal influences, this 4-piece metal band's music is characterized by hammering rhythm section, groovy guitars and acid vocals. Soaring sonic battery, poignant lyrics, an honest depiction of their core values and social commentary - for these reasons, Slave Steel elevates metal music and takes it to another level of artistry.
https://slavesteel.bandcamp.com/?